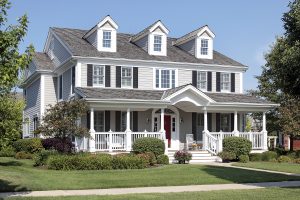 Literature is filled with powerful settings, such as forests, seas, deserts, islands and cathedrals. But no setting is more ubiquitous than the house. Yes, home is a familiar location loaded with memories, anxieties, successes and failures. It is the shelter of family values and often the location for coming of age. For these reasons and more, the house should receive enormous consideration as a potent symbol in our stories.

To gain appreciation for the inherent meaning possible within a literary house, studies in psychotherapy and Jungian archetypes provide powerful insights, not only offering useful taxonomies from the field of psychology, but also illuminating the pervasive appearance of houses in dreams. Since the late nineteenth century, psychologists have made analogies between states of mind and material objects. Sigmund Freud in his Interpretation of Dreams notes numerous correlations between psychotherapy patients’ symptoms (behaviors) and concrete reality. In Freud’s studies, houses are so prominent and recurring that he states, “The human body as a whole is pictured by the dream-imagination as a house and the separate organs of the body by portions of a house” (427).

Likewise, in his book Pyschotherapy, therapist Paul Shilder quotes the late analyst K.A. Scherner’s comment regarding the house as representing the psyche. “Since the body is erect and goes high up and strives high up, the phantasy chooses accordingly the high house consisting of several stories” (125). Sherner’s case-study research made it plain — “house = body” (125). Also, in A Way of Looking at Things, psychologist and psychoanalyst Erik H. Erickson says, “The only typical, that is to say, regularly occurring representation of the human form as a whole is that of a house…” (80).

Therefore, a pattern emerges throughout the psychoanalytic literature that firmly establishes the house as an unconscious corollary to the conscious world and universal human conditions. Hence, the house is a resource as a narrative device that can exemplify struggles and changes occurring in and around it.

Carl Jung, a psychologist and one of the creators of analytic psychology, writes in his seminal work Man and His Symbols that archetypes are the imaginative unconsciously generated symbols of real urges and instincts (58). These archetypes reappear in dream research and psychotherapeutic sessions. Jung recounts his own dream in which he kept discovering parts of a house he did not know existed. Each room apparently possessed significance to some aspect of his waking life and Jung concluded “the house, of course, was a symbol of my personality and its conscious field of interests” (40).

These archetypes are part of what Jung describes as the collective unconscious, symbols that span all humanity and are “collective representations, emanating from primeval dreams and creative fantasies” (42). Cultural researcher Claire Cooper in her article “The House as Symbol of the Self” says that in Jung’s autobiography, he analyzes himself and interprets his own recurring dreams of houses and states, “consciousness [is] represented by the salon. The ground floor is the first level of the unconscious. The lower areas, such as the basement are lesser-known areas (realms) of the unconscious” (171).

Outside of the clinical world of psychoanalysis, literary critics have also forged links between the house and human narrative. Literary critic Elizabeth Wein points out in her paper “Mystery in a House” that the house can “symbolize home and security” (247). She further states the haunted house is a quintessential example of the “sentient presence” of a house, which can become a character in itself. One can view Hogwarts as just this type of sentient place that can actually direct the course of events in certain moments in the Harry Potter books. Literary critic Paula Dewan also explored the house in literature and stated the house in children’s literature is typically represents “a movement [to a place] away from the outdoor world of childhood and towards the civilized indoor world of adults” (7).

Use of the house can span all genres and reading levels. In Lemony Snicket’s picture book The Dark, we dive right into the sea of psychological associations we can have towards a house. In this story, a young boy named Lazlo is afraid of the dark, which is personified through text, and assuages the protangist’s fears by directing him toward a drawer of nightlights for Lazlo’s room. This is a superficial synopsis.

What is clever and subtle is Snicket’s use of different parts of the house to represent various aspects of Lazlo’s transformation. The story begins in the boy’s bedroom as the sun is setting. Shadows are approaching, and we are aware the boy is afraid of the dark. Hearing a voice beckon him, Lazlo goes to the staircase landing on the second floor of the house and looks down into the dark first floor with his flashlight. He goes to the first floor and follows the voice to the basement door. He then looks down another flight of stairs to the dark basement. After entering the basement, he is directed by the dark to look in the lower drawer of a chest of drawers in which there are nightlight bulbs. With these bulbs, Lazlo can sleep more peacefully in his room.

It is important to pause for a moment and observe the importance of levels and staircases in this little story, for as Jung’s dreams showed us, nothing in the setting is irrelevant, particularly from a psychological (or perhaps spiritual) stance. That Lazlo must descend an upper area down two flights of stairs is a beautiful rendering of a character leaving the conscious world behind and entering the realm of the unconscious—the basement, where our primal fears reside. Each descent to a lower level is a break away from comfort and into the unknown, yet it is a journey Lazlo must make in order to face his fear. In this respect, it is a parallel to the underworld of Greek myth where the hero can venture for advice or guidance, then return to the world above transformed.

From a biblical perspective, it may loosely represent the emergence from a tomb into an elevated and enlightened state of being. Remember the words of C.S. Lewis in Mere Christianity: “Imagine yourself as a living house. God comes in to rebuild that house. At first, perhaps, you can understand what He is doing. He is getting the drains right and stopping the leaks in the roof and so on; you knew that these jobs needed doing and so you are not surprised. But presently He starts knocking the house about in a way that hurts abominably.…You thought you were being made into a decent little cottage: but He is building a palace.”

When composing a story draft, it is helpful for writers to keep in mind the symbolic power of the house. What use might one make of an attic (a repository of memories) or a basement (hidden fears or the subconscious) or a kitchen (a place of community and sharing)? Consider levels, staircases and thresholds as areas of transformation, decisionmaking or struggle. Think of the allegorical impact of an upper room or a chapel or altar inside a home. What might occur in or near these interior spaces that perhaps might not have happened in another setting?

Til Turner is an English professor at Northern Virginia Community College, where he teaches composition, creative writing, and children’s literature. He is an active blogger and has a YA paranormal adventure novella due out this spring. He is an active member and licensed reader at St. Michael’s Anglican Church in Winchester, Va. Contact him at tilturnerwriter@gmail.com.

1 thought on “Using the House as a Symbol”