One important element of the fiction writing craft is developing character and/or plot “in-scene.” The goal of in-scene development is to avoid info dumps—summary passages that halt the narrative to give character, setting or plot information. Forward motion is a hallmark of good writing. Letting your scenes convey as much relevant information as possible prevents readers from getting bogged down with authorial explanations. Of course, setting up a scene is necessary, and a certain amount of summary is fine if it is not extensive.

According to Amanda Patterson at WritersWrite.co.az, one element of scene is to incorporate conflict. This is echoed by many other writers. Let’s say you have a husband and wife arguing about attending a church service. Each has his or her own church preferences. One way to build character would be to describe the religious preferences first, then launch into the argument. The preferred method would be to establish the respective preferences during the argument. This would be in-scene as the conflict is unfolding and building.

Janet Burroway, in her classic craft book Writing Fiction, discusses the importance of summary and scene. Summary can fill in background information and establish motives, but the conflict necessary for strong storytelling resides in the scene. Summarizing can often span long periods of time, but scenes are in the moment. Time stands still, and readers are in that moment in a one-to-one relationship with the characters and setting. One important insight from Burroway is that “Scene is to time what concrete detail is to the senses.” (179). Her point is that readers are viscerally part of the story in the scenes, not in the general summaries. It is the conflicts, dialogue and actions that push the story forward.

As Josip Novakovich reminds writers in his book Fiction Writer’s Workshop, scenes are what advance a plot, and no matter how fast-paced the action is in a story, a scene must slow it enough to allow readers to experience the words, thoughts, actions and surroundings of the moment. He states “the characters must want or fear something that might happen during the scene” (119). Consider the scenario mentioned above with the husband and wife arguing about a church service. It would be preferable to learn of the spouses’ religious differences in scene and establish the stakeholder in the scene. Who has the strongest desire to convince the other to attend a particular church service? What is at stake?

In The Practice of Creative Writing, author Heather Sellers points out that scenes must include “time (a clock ticking), place (an intriguing, interesting setting), and action (two or more characters involved with troubles)” (87-88). The changing of scenes can be signaled by a change of location or time. In her book, she includes Raymond Carver’s short story “Cathedral,” which comprises multiple scenes. The story starts with a generous amount of summary in which a man and wife are expecting the arrival of an old male friend of the wife. The man is blind, and the husband is put off that the man, a widower, was once in love with his wife. Toward the end of the opening summary, the wife is playing a cassette tape her friend had sent (since he cannot write.) Notice how Carver switches from summary to scene.

The tape squeaked and someone began to talk in this loud voice. She lowered the volume. After a few minutes of harmless chitchat, I heard my own name in the mouth of this stranger, this blind man I didn’t even know? And then this: “From all you’ve said about him, I can only conclude—” But we were interrupted, a knock at the door, something, and we didn’t ever get back to the tape. Maybe it was just as well. I’d heard all I wanted to.

Now this same blind man was coming to sleep in my house.

“Maybe I could take him bowling,” I said to my wife. She was at the draining board doing scalloped potatoes. She put down the knife she was using and turned around.

“If you love me,” she said, “you can do this for me. If you don’t love me, okay. But if you had a friend, any friend, and the friend came to visit, I’d make him feel comfortable.” She wiped her hands with the dish towel.

“I don’t have any blind friends,” I said.

Immediately after the internal thought of the husband about the blind friend sleeping in the house, Carver puts the action squarely in scene. We are now firmly in time and space. We are in the kitchen with palpable conflict between the husband and wife. Carver develops the wife’s character by focusing on her work at the draining board and putting down the knife, and by using dialogue to show her frustration with her husband. We are witnessing the moment and are experiencing the conflict in real time.

There is a definite need for summary and backstory in fiction writing, but writers must constantly think of ways to push stories forward by establishing scenes that will provide focus on character, setting, and conflict, with an emphasis on conflict. This practice will give stories of any length the pacing needed to allow readers to connect with the world the writer is creating. 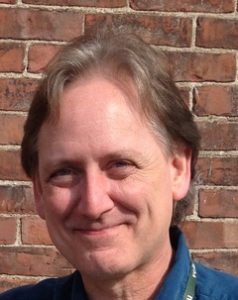 CCWF member Til Turner is an English professor at Northern Virginia Community College, where he teaches composition, creative writing, and children’s literature. He is an active blogger and has a YA paranormal adventure novella due out this spring. He is an active member and licensed reader at St. Michael’s Anglican Church in Winchester, Va. Contact him at tilturnerwriter@gmail.com.