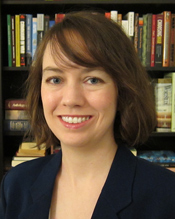 CJ (Cecilia) Brightely grew up in Georgia and attended Clemson University in South Carolina, where she met her husband. They went to graduate school at Texas A&M, then moved to the DC area for jobs. After a few years in the national security world, they had their daughter in 2011; Cecilia stayed home with their new baby and began to focus on her life-long love of writing. She published her first novel in 2012. Now a homeschooling mom of two, she’s a bit busier but still finds time to write.

Several years ago I began my most difficult, most complex, most terrifying series. I didn’t realize when I started the first scene that it would be so hard. I didn’t even know it would be a series. I started with no plan, no ideas, and no characters. The first scene came sentence by sentence, as I was determinedly avoiding another book.* That scene left me with me with a dozen unanswered questions, and I discovered the story as I kept writing. It’s a dark urban fantasy set in a dystopian near-future version of version of Washington, D.C., with Fae, vampires, wolf-monsters, magic, and brainwashing. It is very much a Christian series, for all that God is not mentioned much in the first book. There are allegorical elements as well as explicitly Christian salvation/conversion stories later in the series.

The one series I had previously written had been for the general market, less dark, not allegorical, had a much smaller set of characters, much smaller story arcs, was set in an alternate world with approximately early medieval technology, and had no magic or weird creatures. Everything about this new series was different.

I believe the story was directed by God – not in the way that Scripture is God’s direct revelation, but in that the ideas are not entirely mine, the complexity is far beyond what I would have dared to plan, and the themes and characters weave together in ways I could not have imagined. Sometimes God directs your story more emphatically than at other times.

Writing this series has been a lesson in listening. I’ve been surprised by more than one thing in the story… not just as I write it, but even upon rereading, when I discover symbolism and allegory that I didn’t plan. I wrote the words, I flailed and moaned and groaned about how hard it was, and in the end, I can only claim that I did my best. The parts that work… those are all God’s. The non-working, awkward, not-so-clever parts… that was me. Sorry about that.

Many of us pray that our writing reaches people, that it touches something in them and leads them toward God. If you write for the Christian market, it’s easy to see how this might happen. Characters undergo journeys of forgiveness and grace, and we hope our readers understand forgiveness and grace as applicable to their real lives through Christ. If you write for the general market, it can be tricky to include the same messages. For the general market, I write what I call noblebright fantasy—fantasy that exalts real virtues like courage, generosity, kindness, and sacrificial love. When readers are drawn to those things in a story that moves them, I hope it draws them closer to the One who IS good, and softens their hearts toward the truth of His forgiveness. Also, I believe there is a place for entertainment that elevates our thoughts, fills our hearts with what is true, noble, right, just, admirable, etc., but does not have to be explicitly evangelical.

As I attempt to finish this series, having struggled with the fourth and final book for several years, I’m learning to also pray that I listen better to what God wants to say through my writing. I pray that my heart is softer toward God’s purposes and God’s words. Not just the general ideas, but the specifics – what should I write today, in this writing session, in the next paragraph. I can’t finish this book alone… but that’s fine. I didn’t start it alone. God will not start something through me and then leave me to finish it alone. If I am called to finish it, I must listen to His direction, walk in obedience, and rest in confidence that God will finish the work He began in me and through me. Perhaps it won’t look like I expect it to. But my expectations can’t possibly live up to the beauty of God’s plan.

* The big breakthrough on the other book was when I realized I was trying to make one new character into something he wasn’t. I ended up throwing away about fifty thousand words and rewriting the last three quarters of the book. I’m so glad I did it, but it was such a hard decision!